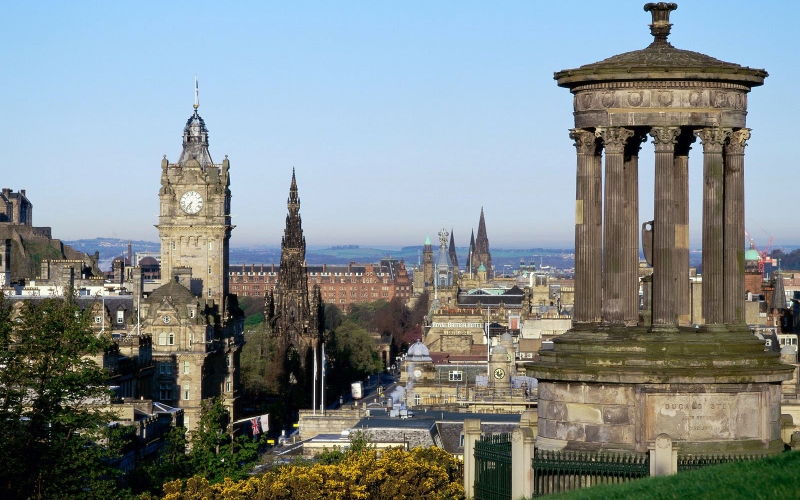 Scotland’s four biggest cities including Inverness, Glasgow, Edinburgh and Aberdeen are all considerably different in each of their architectural styles. DM Design, home design specialist, walks us through these differences and also shows us how the design and construction of these cities were influenced by political and historic events.

The Edinburgh architectural boom of the 1700s was ignited by the Union Act of 1707. The vast majority of the houses were unsafe, tall, tenement buildings designed to house the population into what was a really small space. Mansions did exist, but were located around the countryside and the wealthy and poor lived in close proximity.

The name ‘Athens of the North’ comes from some of the city’s most monumental buildings, which were designed by William Henry Playfair in a classical Greek revival style. He played a huge role in the great impact the Age of Enlightenment made on Edinburgh’s architecture.

Featuring designs with large incorporated gardens, shopping centres and green spaces, a new town was proposed in 1752 by the Edinburgh Town Council. These were mainly aimed at the wealthy.

St Mungo church marked the beginnings of Glasgow as a religious settlement in 560 AD and the Glasgow Cathedral in 1197 while the Act of Union (formation of the United Kingdom) has the biggest influence on the Glasgow city’s architecture.

As part of the post-war regeneration of Glasgow, the impact of Charles Rennie Mackintosh, award-winning architect, transformed the city’s landscape. Mackintosh maintained an ornamental and historical style in some of his work, including the Glasgow School of Art Commission, Walter Blackie’s ‘The Hill House’ family home and the Glasgow Herald Building.

Aberdeen is known as the Granite City with a lot of its famous buildings and homes having been constructed from the granite found in the nearby quarries. Examples of these include the Aberdeen Music Hall (1820), Provost Skene’s House (1545), the Tenements around the Rosemount Viaduct (1880s), Rosemount Square, and No 50. Queen’s Road (1886).

Aberdeen exported granite as well, which established the city as the granite capital of the world.

Inverness is one of Scotland’s most historical towns, with establishment roots going back to 585 AD. The highlands was a favourite meeting point for traders.

King David’s 12th century settlement in Inverness saw the construction of the Inverness Castle, which was changed from a wooden fort to stone.

The longest surviving house in Inverness was built in 1593, the Abertarff House. It was developed with corbie steps which are known to be used in Danish medieval churches as well as in many other Scottish structures.

Built in 1726, the Belnain House characterised the Georgian features of the 1700s, showing strong symmetry and an imposing, fortified appearance. Georgian architecture can also be spotted in the old tollbooth steeple, courthouse and jail.

A wave of architectural change swept across Inverness in the 1800s with the Inverness Cathedral depicting those changes, featuring a Gothic Revival style. The Victorian Gothic-style Town House was built in 1882, prominently depicting finials and gables characteristics.