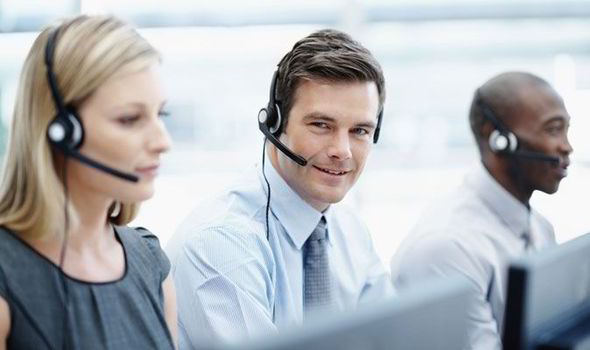 There are roughly 5,840 contact centres currently operating in the UK, employing more than 700,000 staff – which is fewer than you might have thought given the number of calls we all receive. The ensuing conversations can cover anything from charity requests to Financial Marketing services. The recession of 2009 saw a decline in the industry, with gentle improvement in the years since, which suggests there is life in call-based business still. That being said, the volume of outbound calls is a third lower than it was back in 2004, with the vast majority of those being for proactive customer service (notifications and updates on orders), follow-ups and remarketing, rather than the ill-famed cold calling.

The usefulness of call centres (either in house or outsourced) has been evident for decades. Having inbound, outbound and out of hours calls handled by low-skilled (cheap) staff following carefully constructed scripts and procedures at volume made growing a company customer base cost-effective and target-driven. That was a nicely packaged format for companies to follow for a time, at least.

Landlines usage has been all but abandoned since the mobile phone revolution, with mobile devices and now wearable technology being increasingly the most convenient devices for engagement. Many call centres have evolved to meet the customer at a time and place that’s conducive to that goal – known as contact centres, although the term is often used loosely to include call centres too.

At a more advanced level, the contact centre can act in conjunction with a company’s communications team and administrate on various channels across multiple formats, and monitor the time of engagement, method and device that produced the goal conversion (or the funnel). This still requires scripting and procedure to be in place for the contact centre staff, and the option to speak to a person is still a consistent feature, but the broader approach enables a brand to maintain an appropriate level of saturation across the various channels that emerge with changing technology.

What’s next for call centres?

Big changes are once again on the horizon in the world of telecommunications, with Telefónica set to launch its new AI platform, Aura, within a year. Call centres that fail to take note may soon find themselves lagging behind further behind the industry, with Facebook, Microsoft, and UNICEF all enthusiastically participating in the launch.

Aura is an industry first in providing customers with the ability to directly manage their relationship with the company in question, and what data it holds on them, through what Telefónica bosses describe as Aura’s cognitive intelligence.

Cognitive intelligence is a feature of what the tech industry is hailing at the emergence of the 4th platform – the next evolution of the way in which business leverages technology, which in this case speaks of ways in which wearable technology, cloud data, social business and consumption methods are becoming consolidated.

Telefónica UK CEO, Mark Evans, said that “The UK could be one of the first countries to implement this,” which puts the UK first in the firing line ahead of in several European countries including Spain and Germany, for the forthcoming launch.

What to look for when using social media marketing techniques